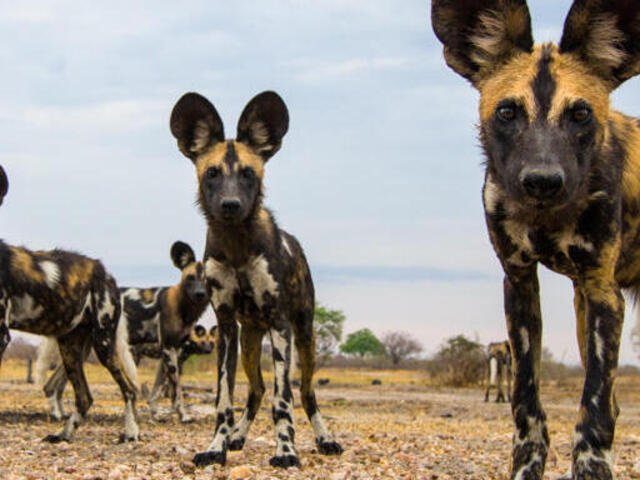 The African wild dog’s scientific name is Lycaon pictus. This means “painted wolf”. This is an appropriate name for the African wild dog. Its coat has patches and swirls of black, gray, yellow and white. Its muzzle however is most often black and the tail tip white without any variations. Unlike most other canines the African wild dog has four toes on each foot. The African wild dog lacks the dewclaw which is a digit that is higher up on the limb than the others. On most dogs it is on the inside of the front legs. The dewclaw does not touch the floor when standing.

African wild dogs are very social animals living in packs of 30 or more individuals. A litter of African wild dog consists of about 10-12 pups. The female is pregnant for 69-73 days. Only the dominant pair of the pack breeds, however the entire pack helps take care of the young. They protect them and regurgitate food for them until they are old enough to hunt which usually is around 12 months old. The average African wild dog lives about 10 years.

The entire pack hunts together allowing them to hunt large prey. Because of this, their diet tends to consist of wildebeest, zebra and impala. They also eat grey duiker, steenbok and younger individuals of larger species of antelope as well. When hunting the pack picks out a weak or injured individual than chases it until it can not run any longer. The dogs then kill their prey quickly and feed on it. African wild dogs hunt during the day.

In the past African dogs ranged all over the Africa except for the rainforests and deserts. Now there are only a few small areas south of the Sahara where they remain. There is an estimated 2,000 to 5,000 individuals left in the wild today. Many wild dogs are often killed by farmers who are afraid that the dogs will kill their livestock. African wild dogs are negatively affected by the fact that they compete for prey with larger carnivores such as hyenas and lions. The fact that they roam such large territories makes it hard to protect them as well for the wildlife protected area would have to be very large in order to be effective.

The largest remaining populations are associated with the Selous Game Reserve in Tanzania. The Selous Game Reserve is one of the largest animal reserves in the world. Also, in the late 1990s the IUCN (International Union for Conservation of Nature and Natural Resources) began planning a survey of the species as well as a plan to get legal protection, zoning, and vaccination from diseases for the animals. They are also considering reintroduction along with other methods of preserving the species.

If you interested in finding out how you can help all endangered species and the environment visit Earth Share Online.