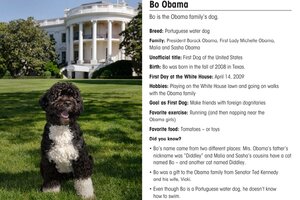 Reaction to first puppy Bo, a purebred 6-month-old Portuguese water dog, has been mixed. While the Obama girls are understandably delighted with the adorable little fellow, some feel that by taking in Bo as opposed to a rescue dog, President Obama has broken a solemn promise.

And, not surprisingly, for the millions of dog lovers in this country (there is at least one dog in 40 million American households) , this was wonderful news. Indeed, in the hearts and minds of dog fanciers throughout the world, President Obama’s stock rose considerably after he announced that he would rescue a mutt.

Some people are outraged over the Obama’s decision to adopt Bo, the Portuguese water dog.

“The Obamas have taken ‘limousine liberal’ to a new level,” writes Nancy Watkins of Lake Forest in a letter to the Los Angeles Times. “They promised their daughters a puppy if the moved to the White House and, while they discussed rescuing a mutt, they have in fact received a purebred dog from the Kennedy family, pledging instead to make a financial donation to the D.C. Humane Society.”

…. “What the Obamas have done is create a boon for breeders, while millions of equally adorable and sweet dogs suffer in shelters. They are role models for parents who recklessly promise pets to their children, creating even more shelter dogs. Shame on them.”

In the interest of fairness, though, it should be noted that Bo the first puppy is technically a rescue dog. His first owner reportedly gave him up because he was not a good “fit” and thus returned him to the breeder. Bo was then “foster parented” by Ted Kennedy’s dog trainer for a month or so before finally finding a permanent home with the Obamas.

Therefore, Bo the Portuguese water dog is what Humane Society President Wayne Pacelle describes as a “second chance” dog. And for some, this is a mitigating factor that, as Wayne Pacelle puts it, lends the Obama dog controversy “some shades of gray.”